What is Congenital Hypothyroidism?

The lack of hormones slows down all metabolic processes in the body, which in turn has a negative effect on the performance of those affected. In addition, the thyroid hormones T3 and T4 are important for human development and promote growth. If hypothyroidism is already present in babies because it is congenital, there are significant developmental restrictions .

This includes a negative impairment of brain maturation, which in turn results in neurological damage. The growth of the bones is also delayed and the affected children suffer from slowed reflexes and react apathetically.

In some individual cases it was possible to provide evidence of gene mutations . The genes played an extremely important role in thyroid development. In other sufferers, the thyroid is not in its normal anatomical position, which limits its function.

In such cases, it is triggered by the transfer of drugs the mother received or blocking antibodies . Reasons for this are a lack of iodine or an iodine overdose.

Despite the extremely important importance of thyroid hormones for the development of human organs, there are initially no noticeable symptoms in congenital hypothyroidism. Only later do unspecific symptoms appear. The affected children often suffer from jaundice, which lasts about two weeks.

Furthermore , the babies drink poorly and have only a weak sucking reflex. Their reflexes are also weakened. A noticeable feature is an enlarged tongue, which is known as macroglossia. Another symptom of congenital hypothyroidism is constipation .

If the sick child reaches toddler age, his or her reduced height is noticeable. The age of the bones and teeth does not correspond to the age of the child and are underdeveloped. In addition, the children are mentally slow to react and show decreased intelligence . Other conceivable sequelae of congenital hypothyroidism can include hearing loss and speech disorders .

If congenital hypothyroidism is left untreated, the child is at risk of cretinism due to the lack of thyroid hormones . This leads to irreparable damage to the central nervous system. The affected children therefore suffer from skeletal malformations, short fingers, deafness or open fontanelles.

An early diagnosis of congenital hypothyroidism is of crucial importance for the further development of the sick children. In most countries, the diagnosis is made as part of screenings in newborns. In Germany, doctors determine the level of the hormone thyrotropin (TSH) during a legally prescribed hypothyroidism screening for this purpose.

In the case of insufficient thyroid hormone production, this hormone rises sharply. The examination takes place between the 36th and 72nd hour of life. A few drops of blood are taken from the heel. If there is congenital hypothyroidism, the T3 and T4 values ​​are lowered because the hormones are not produced to a sufficient extent.

If congenital hypothyroidism is discovered during the first two weeks of life, it can be treated excellently and takes a positive course. At a later age, there are only minor differences in intelligence, school performance and neurophysiological tests compared to healthy children. If the treatment takes place at a later point in time, there is a risk of impaired intelligence despite normal physical development.

If a newborn has congenital hypothyroidism, they will develop a number of unusual symptoms after they are born. On the basis of this, a qualified pediatrician can infer the disease. Further examinations usually verify the initial diagnosis. The mother supplies the child with thyroid hormones until it is born. Without the routine thyroid screening done since 1978, doctors wouldn’t necessarily notice congenital hypothyroidism right away.

The congenital underactive thyroid must be treated for life. In the beginning, a visit to the doctor is necessary on a weekly or fortnightly basis. Later, it is sufficient to schedule a routine doctor’s visit every three months, because this malfunction is potentially dangerous. The lack of thyroid hormones needs to be compensated. If this does not happen, further sequelae are to be expected. In some cases, thyroid dysfunction is temporary. In most cases of congenital hypothyroidism, the dysfunction lasts for life.

Thanks to its far-reaching consequences for the organism, the underactive thyroid must be treated by administering the missing thyroid hormone. With the correct dosage, the child is fully capable of development. Crises are not to be expected. However, they can still occur – for example, if the thyroid hormone is excreted by diarrhea before it is absorbed into the organism. Therefore, it is advisable to see a doctor for any illness that can lead to such results.

Therapy for congenital hypothyroidism should be started as early as possible because the impairment of the nervous system may no longer be reversible. Just waiting for the results of the examination can mean an unnecessary delay. For this reason, treatment must begin immediately after the blood sample has been taken if the screening results are positive.

The most important component of the therapy for congenital hypothyroidism is the replacement of the hormone T4 (thyroxine) with L-thyroxine. The administration begins with a low dose, which can be increased gradually over the course of the treatment. If the patient reaches a certain hormone concentration, this ultimately remains.

By treating congenital hypothyroidism, the TSH level in the blood should normalize and freedom from symptoms should be achieved. Constant checks of the hormone level are an important part of the therapy. The doctor checks the normal functional position of the thyroid gland.

In many cases, this disease is discovered relatively late, so that treatment can only be initiated late. The patients can suffer from jaundice . There is also a significantly reduced intake of fluids in babies, which can have a very negative effect on the development and general health of the patient. Furthermore, the reflexes of those affected are weakened in most cases. Those affected often suffer from constipation and thus from a significantly reduced quality of life.

For the parents in particular, this illness represents a strong psychological burden, so that they also need treatment. The intelligence of those affected is also significantly reduced by this disease, so that those affected depend on the help of other people in their lives. There are also speech disorders and hearing loss. In the worst case, complete numbness also occurs in the patient.

A causal treatment of this disease is usually not possible. Some complaints can be limited, but not completely cured. Whether the disease will lead to a reduction in life expectancy cannot generally be predicted.

The exact causes of congenital hypothyroidism are not known. For this reason, there are no effective preventive measures.

Congenital hypothyroidism cannot be completely cured, which is why aftercare relies on everyday support and the avoidance of complications. The extent to which medical supervision is necessary depends on the extent of the symptoms. Basically, it can be said that early treatment leads to comparatively few symptoms.

The newborn screening indicates the functionless thyroid gland at an early stage. The number of hormones can be clearly determined with a blood test. This will also be continuously monitored in the subsequent period. Doctors can derive a clear drug therapy from this. The latter consists in the administration of the T4 hormone. In this way, secondary diseases can be prevented.

Parents and loved ones play an important role in the first few years of life. The child’s thirst for action must be encouraged. Sports activities, walks and daily hours in the sunlight improve wellbeing. Unfortunately, congenital hypothyroidism is not always treated early. The well-known complications result from this.

These make a normal life almost impossible. Among other things, the senses and mental abilities are insufficiently trained. Patients are often placed in nursing homes for the rest of their lives and require care. A high degree of disability often burdens the parents, who in turn seek help from psychotherapy.

If congenital hypothyroidism occurs, it is essential to consult a doctor and receive a hormone preparation to stimulate the thyroid gland, as ignoring this disease can have serious mental or nervous consequences. The missing hormone is very important for development, especially in certain growth phases.

Anything that has a positive effect on well-being is supportive: long walks in the fresh air, soaking up the sunlight, doing sports and eating a healthy diet . An underactive thyroid makes you listless, so it is important that activities are continued.

It is not uncommon for an underactive thyroid to lead to depression, which is why well-being is very important in hypothyroidism. It should also be checked whether the body is deficient in vitamins , as vitamin deficiency often also occurs in people with metabolic problems.

The thyroid value is checked during the blood test and must be monitored at regular intervals so that the hormone administration can be perfectly matched to the body. It is also advisable to have an ultrasound performed by an internist to determine whether the thyroid is abnormal. The earlier hypothyroidism is diagnosed, the fewer consequences it leaves behind on the person affected and therapy can be started. 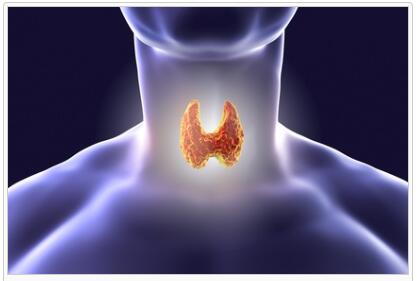