What is a congenital curvature of the penis?

Congenital penile curvature is a deformation of the penis that can either be diagnosed in the newborn or does not appear until puberty . A distinction is made here between the congenital curvature of the penis that occurs at birth and the erectile tissue atrophy that only develops during puberty.

When defining penile curvature, it is important to know that slight bending of the flaccid or erect penis in any direction or like a corkscrew around its central axis is natural. The curvature of the penis is only classified as clinically significant from 30 °, and the person concerned must expect sexual problems only from a deviation of 60 °.

Congenital penile curvature only requires treatment if the person concerned is painful or has severe restrictions on sexual intercourse.

The cause of the congenital penile curvature is already evident in the name of the disease: it is congenital.

During the erection, this leads to a different length of the two sides or erectile tissue, which results in the curvature due to the fact that they have grown together. Another rare cause is hypospadias , the shortening of the urethra.

With congenital penile curvature, those affected primarily suffer from a malformation of the penis. This malformation has been present since birth and is not acquired. The erectile tissue is crooked and does not look aesthetically pleasing. For this reason, many patients also suffer from psychological complaints, depression and reduced self-esteem due to the congenital curvature of the penis .

In some cases, the disease can also lead to male sterility. The patients are no longer able to father a child, which can also have a negative effect on the relationship with their partner. If the curvature of the penis is not treated, in the worst case scenario it can lead to a complete loss of the erection. Usually this loss cannot be reversed.

At this point, a brief digression is necessary on the acquired penile curvature, which occurs in around 5% of men after injuries to the penis or as a result of the disease induratio penis plastica.

Any change to the penis should be discussed with a specialist, either a urologist or a venereologist . After taking a detailed anamnesis, in which the time of first occurrence is also important, he will look at the change and order further diagnostic measures.

In some cases, pain may be experienced with an erection or during sexual intercourse. In addition to acute pain and erection problems, congenital penile curvature is viewed as unaesthetic and can therefore greatly reduce the patient’s self-esteem. This can lead to psychological problems and in the worst case to depression , which should be treated by a psychologist .

Treatment is not necessary as long as the person is not in pain. An exclusively cosmetic straightening is usually not carried out, as this shortens the penis and inflammation and scars can very easily occur during the operation. In addition, there is a great risk of loss of erection. If the person concerned only suffers from the curvature of the penis and does not feel any pain, surgery is not recommended. A direct cure of the symptom is not possible.

A congenital curvature of the penis has existed since birth, but is usually only perceived as problematic by the person affected during puberty. If it is only mildly pronounced, young men only notice that the limb looks crooked when they have their first erections. A doctor’s visit is not necessary from a medical point of view if there are no other symptoms such as pain during sexual intercourse or problems penetrating the partner’s vagina or urinating.

It shouldn’t get to the point where the patient’s self-esteem and satisfaction suffer from the curvature of the penis. This happens when men with this problem wait too long to visit the doctor for a given reason, because they have many more unpleasant experiences during sexual intercourse and, last but not least, lose the desire for sexual intercourse.

A competent medical professional will only advise his patient on treatment if the congenital penile curvature causes discomfort or problems with sexual intercourse. Because of the side effects and risks of penile correction, which can range from bleeding and inflammation to scarring, pain and loss of erection , cosmetic correction is to be regarded as medically nonsensical.

The aim of the operation is not the normality of the penis curvature, this cannot be achieved by an operation, but the straightening of the penis to a curvature with which sexual intercourse and freedom from pain are possible. The operated person usually has to accept a shortening of his penis and / or its reduced sensitivity.

In the case of acquired penile curvature, various conservative methods are used, which may be worth trying if you are congenitally affected. This includes taking or injecting medication, technical processes such as iontophoresis or shock wave therapy, and mechanical processes such as vacuum pumps and stretchers. However, curvature of the penis cannot be healed in any case at the present time and is therefore not a treatment goal of conservative therapy.

The congenital curvature of the penis is so complicated due to the irregular and therefore problematic growth of the limb that it will not improve spontaneously. Thus, a spontaneous straightening or aesthetic improvement of a crooked male member is not to be expected and has never been described.

It has been shown in the course of several treatment methods that all non-surgical measures are ineffective. Stretchers, any medication, and other devices that promise relief are not effective. In this respect, those affected by a congenital curvature of the penis only have to accept their condition if they do not want to undertake an operation.

Surgical treatment, in the case of severe impairment, is usually successful. It still carries risks. Congenital curvature of the penis corrected in this way does not recur in most cases. In rare cases, however, it is recurring, depending on the reasons for the curvature of the penis (shortened urethra, irregularly grown cavernous bodies, etc.). In almost all cases, the perceived quality of life of those affected improves after the operation, as their own body sensation is assessed more positively. In addition, sex life is mostly improved.

Unfortunately, congenital penile deviation cannot be prevented because it is genetic. However, if there is an appropriate family history, early examinations in childhood and timely treatment of severe penile curvature can avoid severe pain and discomfort during puberty.

Congenital penile curvature does not necessarily have to be treated. Doctors only recommend surgery if there are serious complaints or problems. If a certain curvature of the male member remains, the suffering is more of a psychological nature. Shame of the abnormality usually occurs in front of sexual partners.

This is why depression and anxiety arise especially during puberty . Follow-up care can strengthen the self-confidence of those affected through psychotherapy . Aesthetic criteria do not cause any loss of function. Many genital organs have slight curvatures.

If a surgical procedure is carried out, side effects can occur. Mostly these are in the form of pain and loss of feeling during the sexual act. As part of follow-up care, doctors can diagnose these problems, but usually cannot cure them. At least medication can be prescribed for pain. Sometimes there is also inflammation or bleeding from the scars. These are often triggered by sexual practices.

Follow-up care can only provide everyday tips. Often all that remains is to spare the male member. If an operation goes without complications and there are no problems weeks or months after the operation, follow-up care is not necessary. The congenital penile curvature was permanently and successfully remedied.

Since a congenital curvature of the penis is caused by a growth of the penis tissue that deviates from the norm, the possibilities for self-help are limited.

Attempts with penis pumps, stretching devices or other devices that promise success must be discouraged. It has been shown that they cannot straighten a curved penis. Rather, some of these methods are associated with a significant risk of injury. Likewise, there are no active ingredients that can be absorbed by syringe, pill or ointment and straighten the penis. An incorrect growth cannot be corrected without surgical measures.

Since the shape of the penis will no longer change by itself in the case of congenital penile deviation, it makes sense for those affected to deal with their situation and to develop a way of thinking and acting that is more positive towards their penis. Methods for improving body awareness and increasing self-acceptance can be used here, ranging from yoga to meditation . Even talking therapies are possible.

Depending on the severity of the curvature, the sex life of those affected is often restricted. Trying out other positions – or even sexual practices – with the sexual partner should be done if there is sufficient trust and insofar as the crooked penis does not cause any discomfort. Often there are still opportunities that can enhance sex life for those affected. 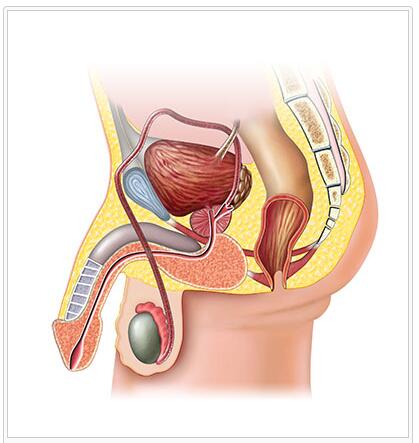