The angina Plaut Vincenti is the relatively rare subspecies of tonsillitis for which a mixed infection of the bacteria Treponema vincentii and Fusobacterium nucleatum responsible. The tonsillitis is typically one-sided, mostly adolescents are affected.

According to BIOTIONARY.COM, Plaut-Vincenti angina is a serious tonsil infection, but in addition to swallowing disorders , there are initially hardly any complaints worth mentioning.

Tonsillitis are often painful, but mostly harmless diseases that mainly affect children and adolescents and are often treated with antibiotics due to the risk of complications or secondary diseases.

Medicine divides these diseases, which often look similar to the layman, according to the different types of pathogen or assigns them to larger clinical pictures. Plaut-Vincenti angina is a relatively rare sub-form of tonsillitis (tonsillitis).

As is so often the case in medicine, Angina Plaut-Vincenti owes its less than catchy name to its discoverers: As early as 1894, the German bacteriologist HC Plaut described the bacterium Treponema vincentii, which is a class of spirochetes, and thus gave it its name. A little later the disease was specified in more detail by the French scientist JH Vincent.

A special feature of these bacteria is that they do not simply migrate from one person to another through infection, as is the case, for example, with the most common form of tonsillitis caused by streptococci . Rather, they can live on the human mucous membranes without causing damage – only the combination of both bacteria (co-infection) ensures that they become pathogenic, they need each other for their pathogenic effect.

In addition, the bacteria usually need favorable conditions: Inadequate oral hygiene , poor nutritional status or a generally weakened immune system of the organism can prepare the ground for them. Angina Plaut-Vincenti is also referred to as ulcerative tonsillitis because its clinical picture is characterized by ulcer-like (ulcerative) changes in the tonsils, which are accompanied by necrosis (tissue destruction). This can spread to the surrounding oral cavity over time.

Plaut-Vincenti angina is a serious tonsil infection, but in addition to swallowing disorders , there are initially hardly any complaints worth mentioning. The general well-being is usually not impaired. The body temperature is only slightly increased. It is usually between 36 and 37 degrees Celsius.

On closer inspection, however, a unilateral ulcer on a palatine tonsil can be found, which leads to the death of the mucous membrane. This results in greasy green-gray-yellowish deposits that cause a bad smelling bad breath. The ulcers already differ in appearance from normal tonsillitis . It is a special form of angina tonsillitis.

While normal tonsillitis is caused by streptococci , there is a mixed infection between spirochetes and fusobacteria. In addition to the tonsils, these can also infect the cheeks, gums, lips and larynx. The lymph nodes in the corner of the jaw are almost always swollen. Young people in particular are often infected with these pathogens.

However, fusobacteria and spirochetes are very aggressive bacteria that can destroy the cheeks and gums, especially in immunocompromised people . In various developing countries where the population suffers from malnutrition and hunger, this infection often results in disfigurement of the face due to necrosis of the cheeks. In exceptional cases, however, Plaut-Vincenti angina can lead to a gangrenous destruction of the cheeks.

Another important difference between Plaut-Vincenti angina and the other, more common forms of tonsillitis is the unilateral occurrence: Usually only one tonsil is affected, but this is massive: when you inspect the oral cavity, you can see a fibrin-covered ulcer with necrosis, and a gray one also appears -greenish, greasy coating of the affected almond, which can also bleed when wiped with the wooden spatula. The inflammation gives off a foul, putrid odor.

According to the inspection picture, the complaints of Angina Plaut-Vincenti are mostly one-sided, but stand in a striking contrast when it comes to their severity: the disease looks bad, but hardly causes general complaints, often no fever, only one-sided swallowing difficulties are noticed and lead in addition to the visible findings and the foul smell, usually to a doctor’s visit.

Plaut-Vincenti angina usually proceeds without serious complications in modern industrialized countries. However, if the oral hygiene is poor, the tissue necrosis can spread from the tonsils to the entire oral cavity. There is a risk of tooth loss and the destruction of gum tissue.

In developing countries the clinical picture can develop much more dramatically. Plaut-Vincenti angina often becomes chronic in weakened and malnourished people or people who suffer from an immunodeficiency . Since the necroses lead to anaerobic conditions in the tissues, the consequences may include intestinal ulcers, tropic ulcers and pulmonary gangrene.

A dreaded complication is gangrenous stomatitis, which is also known as noma, cheek burn or water cancer. Due to the often poor medical care in the affected countries, the disease continues to advance. Starting from the oral mucosa, the bacteria of the oral flora destroy the mucous membrane, the bones and the face over time.

If left untreated, the general condition deteriorates dramatically and life-threatening complications occur. These include bloody diarrhea, pneumonia and sepsis. In 70 to 90 percent of the cases, the affected children die from the consequences.

With the symptoms of tonsillitis, you should go to the doctor no later than the next day. The doctor can use a throat swab and an examination of the oral cavity to determine whether it is Plaut-Vincent angina and initiate appropriate treatment steps. A typical warning sign of Plaut-Vincent angina is a foul-smelling greenish-gray coating in the throat. The discharge is often accompanied by difficulty swallowing, bad breath and the typical symptoms of tonsillitis.

Later on, an ulcer can also form on the palatine tonsil. If the above main complaints are present, medical advice is required. An immediate doctor’s visit is recommended if you have a high fever of more than 39 ° C. If children are affected, they should be taken to the pediatrician immediately .

Medical advice is particularly needed in the case of severe physical symptoms that increase rapidly despite the use of home remedies and light medication. Advanced Plaut-Vincent angina must be treated by a doctor in any case. This prevents complications such as tissue necrosis, tooth loss and the spread of inflammation.

Since other, serious illnesses can be behind such a picture of tonsillitis, a visit to the doctor is worthwhile in two respects.

Malignant tumors of the oral cavity, in particular, can look similar, but usually grow more slowly and typically affect other age groups (Angina Plaut-Vincenti: adolescents; oral cavity tumors: middle-aged smokers). Diseases such as tuberculosis or another treponematosis, syphilis , must also be considered in principle. Furthermore, chronic tonsillitis caused by other bacterial pathogens can lead to greater destruction of the affected tonsil, but then has a correspondingly longer history.

If the inflammation develops within a short time and without other general symptoms such as coughing , night sweats or weight loss , simple angina is the most likely diagnosis. An experienced doctor can assess this with just a few questions and a glance; in case of doubt, a microbiological examination after a smear of the affected almond, and rarely a blood test, can clarify the situation.

Basically, however, the differentiation from streptococcal angina is a visual diagnosis; Plaut-Vincenti angina can then be treated without any major fuss: Antibiotic therapy is only really necessary in more severe cases and is then carried out with penicillins , for example . Otherwise, local disinfecting measures and careful oral hygiene are sufficient.

With Angina Plaut-Vincenti, the patient primarily experiences severe swallowing difficulties and pain in the throat. These can significantly impair the quality of life and lead to complaints and complications in everyday life. In addition, tonsillitis occurs and in many cases those affected also suffer from a very strong bad breath.

The difficulty in swallowing makes it much more difficult to take food and fluids, which can lead to dehydration or malnutrition . Furthermore, those affected appear exhausted and tired and can usually no longer concentrate. There is often a cough or sweat , which occurs mainly at night.

Plaut-Vincenti angina can be treated with the help of medication and does not lead to further complications or complaints. As a rule, the disease progresses positively if a doctor is consulted at an early stage. Special consequential damage does not occur. Plaut-Vincenti angina does not reduce the patient’s life expectancy either. However, a renewed illness cannot be ruled out after the treatment. This is especially true if the person concerned suffers from a weakened immune system.

The last-mentioned measures are also the best means for prevention, especially if the organism is already immunocompromised by other illnesses or medication.

In most cases of Angina Plaut-Vincenti, follow-up care is not necessary or possible. First and foremost, patients are dependent on medical treatment in order to completely alleviate the symptoms of Plaut-Vincenti angina and to avoid further complications. In most cases, the disease can be cured well, so that the patient’s life expectancy is not reduced.

With this disease, those affected are primarily dependent on taking medication. This is the only way to kill the bacteria. It is important to ensure that the antibiotics are taken regularly. Possible interactions with other drugs should also be considered in Angina Plaut-Vincenti.

Those affected should not drink alcohol during treatment in order not to reduce the effectiveness of the antibiotics. Regular blood tests are also useful to provide an overview of the healing process. Furthermore, a high standard of hygiene is to be observed, with particular attention to oral hygiene. A stay in hospital is not necessary for Angina Plaut-Vincenti.

This particular form of tonsillitis usually occurs when the bacteria that cause it find favorable conditions in the host. In particular, poor oral hygiene , poor nutrition and a weakened immune system can promote the onset of Plaut-Vincenti angina and make it more difficult to progress. Self-help measures should therefore be aimed at eliminating these factors.

Good dental hygiene not only reduces the risk of developing Plaut-Vincenti angina, it also lowers the risk of tooth decay and periodontal disease. Everyone should therefore know the basics of oral hygiene and take them to heart. Teeth need to be cleaned thoroughly at least twice a day. To do this, you have to brush from red to white for about three minutes, i.e. from the gums towards the teeth. The tongue, on which plaque and bacteria accumulate, must not be forgotten either.

Oral hygiene is additionally supported by a healthy diet. This also has a positive effect on the immune system, so that Angina Plaut-Vincenti is prevented twice. A healthy diet is based on whole grains, nuts and seeds and as much fresh fruit and vegetables as possible. Animal fats and proteins should be reduced and replaced with plant-based products.

Furthermore, make sure you get enough exercise, with your health benefiting from a brisk walk of around 30 minutes a day. 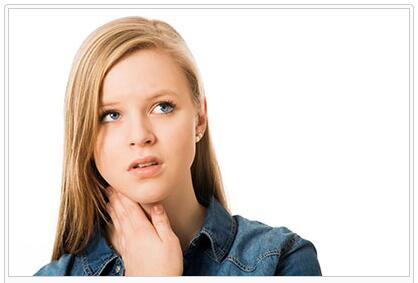