Age spots , lentigo senilis or lentigo solaris often appear in later life. As a rule, they are not dangerous but merely represent benign skin changes. Most of them are brownish and of different sizes. The most common age spots are on the hand, face, and chest. Nevertheless, it is advisable to have age spots checked for changes by your family doctor or dermatologist at regular intervals.

What are age spots?

According to BESTITUDE.COM, age spots are pigment disorders of the skin. They are caused by a lifetime of exposure to sunlight. Age spots are light brown spots mainly on the back of the hands, forearms and facial skin.

Age spots, lentigo senilis or lentigo solaris are sharply defined, light brown-colored changes in the skin that are associated with increasing age. These are changes that result from decades of exposure to various forms of radiation.

Age spots are initially not dangerous and should only be observed when they appear. Most older people develop them sooner or later without ever causing problems.

In some cases, however, age spots can still represent a harmless preliminary stage of skin cancer , which means that they must be constantly monitored closely – even if they have existed for several years.

Age spots are closely related to years of exposure to ultraviolet radiation, for example from sunlight or from frequent sunbathing visits. Anyone who has been outside in the sunlight almost constantly as a child is more likely to develop age spots as they get older.

In medical jargon, age spots are also known as macules and are localized, sharply demarcated, light brown areas of the skin in which there is a stronger formation of melanocytes, which are responsible for the production of the skin pigment melanin. Strictly speaking, age spots are a local accumulation of the pigment lipofuscin.

The cell membranes are constantly oxidizing unsaturated fatty acids and throwing off this pigment in the process. However, the cell’s lysosomes are no longer able to break down the lipofuscin, which means that it remains as an age spot on the skin.

Age spots primarily appear where the skin has come into frequent contact with UV radiation in the course of life – for example on the back of the hand, on the forearms, on the face and in the area of ​​the cleavage. They usually appear from the age of 40, but can affect younger people as well. Age spots usually have a brownish-yellowish to dark brown color, whereas they can differ greatly in size and shape.

Some pigment spots are barely visible, while others reach a size of several centimeters. The shape is often reminiscent of a slightly curved lens, but it can also be more oval and flat. Most of the time, however, the spots appear slightly raised. Age spots are also usually very different from the surrounding skin – similar to freckles.

In contrast to these, however, they hardly fade in the cold season. Since these are only pigment disorders , age spots do not cause any physical discomfort such as pain or itching . However, depending on how much the skin changes are visible to others, those affected can suffer from more or less pronounced psychological pressure. Since the symptoms of age spots can be very similar to those of white and black skin cancer , a dermatologist should also be consulted with any skin changes.

Age spots practically do not know a documentable course of the disease. They arise spontaneously and only require that the person concerned has been exposed to UV radiation or solar radiation at a younger age. Over the years, the disturbance of the cellular metabolism develops in the area of ​​the age spots, which ensures that the pigment lipofuscin can no longer be broken down.

Most age spots will form over a short period of time and spread across the skin until they finally find their local limits. If they spread slowly or seem to keep growing, one should assume that they are no longer harmless. This would be more of a sign of uncontrolled growth that should be checked and treated by a doctor.

Complications related to age spots (lentigines solaris or seniles) are usually not to be feared. This also applies to untreated age spots, which may represent a cosmetic problem. Age spots consist of an accumulation of the brownish pigment lipofuscin.

They are oxidized, incompletely degraded unsaturated fatty acids from the cell membranes. In rare cases, an age spot can develop into a so-called age wart (seborrheic keratosis). These are benign, highly pigmented small skin growths that mainly appear on the face and upper body.

It is very likely that aging warts will develop independently of exposure to sunlight because they are predisposed, i.e. they correspond to a genetic predisposition. Age warts may also represent a cosmetic problem. So far, no degeneration of the cells into black skin cancer or similar problematic cells has been observed.

While there are a number of suggestions for removal of age spots using home remedies in addition to professional laser therapy , this does not apply to age warts. Conventional wart remedies are not suitable because the age warts are not caused by viruses. The real danger with old age warts is that in some cases the symptoms of black skin cancer were mistaken for old age warts and therapy was delayed accordingly.

Age spots arise from locally occurring harmless pigment disorders in the skin. Their occurrence is favored by decades of exposure to solar radiation, but also by a genetic predisposition. If there is a confirmed diagnosis that the pigment disorders are age spots and not dangerous skin changes as a precursor for white or black skin cancer, the problem is purely cosmetic.

There is no imminent danger from them. Nevertheless, it is advisable to regularly check the appearance of the skin for any locally conspicuous changes, or to carry out a visual inspection with the help of your partner. Some skin lesions with the potential to develop malignant skin cancer look like harmless age spots. A check of the skin’s appearance by the dermatologist at regular intervals seems sensible in order to maintain the option of early detection of skin cancer and thus to preserve the possibility of early treatment.

Irrespective of regular routine examinations, an experienced dermatologist should be consulted immediately as soon as a noticeable and unusual skin change appears. There are a number of treatment methods to have age spots, which are perceived as cosmetically very annoying, removed by a dermatologist or an experienced family doctor with the appropriate equipment. Laser therapy has established itself as particularly effective, but a number of home remedies are also suitable for alleviating the cosmetic problem of age spots.

Age spots are benign and therefore do not require any special treatment. It is important, however, to have a doctor examine the stain if it occurs in order to check its consistency. If it is actually deposits of the substance lipofuscin, cosmetic methods of removal can be discussed with the doctor.

Laser removal therapies have been found to be particularly effective in combating age spots . Anyone who is afraid of such an operation can also rely on treatment with fruit or vitamin A acid or on preparations containing retinol.

So that the age spots do not return again, extreme contact with UV radiation should be avoided in the future. When treating, it must always be borne in mind that the age spot could be a so-called malignancy, i.e. skin cancer. Therefore, every new age spot should be examined by the doctor to ensure that it is not a dangerous new formation. Otherwise, if left untreated, this could lead to metastases and become even more dangerous.

As a rule, age spots do not need treatment. These spots are mainly promoted by direct sunlight and do not lead to further complications or complaints. For this reason, they do not need to be treated. Treatment is only necessary if the age spots change in shape, color or size. This can be a tumor that should definitely be removed.

Sometimes the patients are ashamed of their age spots and feel uncomfortable with their bodies. It can also lead to social complaints. Younger people in particular can develop deeply depressed moods due to age spots if the skin is not adequately protected.

Usually the age spots can be treated with the help of lasers or medication. Although they cannot be completely restricted, they can be reduced relatively well. The life expectancy of the person affected is not reduced by the age spots. Likewise, the patient has a relatively large number of means of self-help available in order to combat the age spots.

Follow-up care aims to prevent disease recurrence. However, age spots are by no means a disease. They are completely harmless. Scheduled medical treatment is therefore not necessary. If people want to have the skin symptoms removed, this is usually not subsidized by a health insurance company. The reason for this are aesthetic criteria.

Age spots appear with age. They testify that those affected have been exposed to ultraviolet radiation in the course of their lives. Anyone who wants to prevent their emergence has to be active at a young age. Avoiding strong sunlight is considered essential protection. The use of sunscreen is a must in southern countries. Patients should avoid the particularly strong midday sun. Under no circumstances may solariums be used.

The age spots are usually removed using laser therapy. Bleaching creams and chemical peels also lead to the desired result. After an area has been treated, the sun must be avoided for weeks or even months. Of course, the characteristic skin changes can occur again in other parts of the body. Then repeated treatment is necessary. To diagnose, a doctor uses a halogen lamp and observes the age spots through a lens. This rules out skin cancer.

Age spots can be relieved independently with the help of various home remedies and measures. Concealer cream that is applied to the skin in the form of a concealer stick or lotion promises quick help. Natural products such as buttermilk, vinegar or lemon juice also provide the skin with moisture and oil. In addition, preparations containing vitamin E can be taken. The active ingredient naturally brightens the pigments and, when applied locally, reduces the appearance of further age spots.

Other natural remedies include garlic , lactic acid and the juice of parsley . Also, apple cider vinegar , potato juice, castor oil can help against age spots. The agents mentioned are particularly effective in combination with measures that are gentle on the skin.

An alternative treatment method is cold therapy , in which the spots are lightened with liquid nitrogen. Under certain circumstances, the affected skin layers can also be peeled off. However, this so-called dermabrasion can leave stains and should always be done under medical supervision. 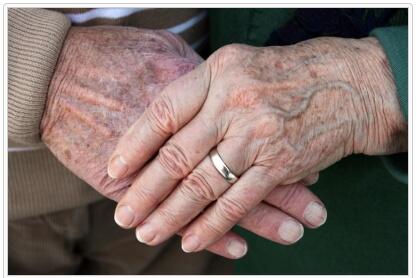